I believe that during an individual’s lifetime we all meet that particular person who influences our future behavior and personality. For me it was my uncle, Simon Kwalwasser, MD. Simon was my mother’s brother. He attended medical school at St. Andrews Medical College in Scotland before World War II. He served in the army as a psychiatrist during the war. Eventually he settled down in Jamaica Estates, New York, where he had a private practice in his home. Simon was Associate Medical Director at Hillside Hospital from 1949 to 1960. He was also an attending of the psychiatric department at Long Island Jewish Hospital from 1954 till the time of his death.

Simon was the model of a true professional. He spoke intelligently, shared his knowledge with the medical community and his patients, dressed “like a doctor should,” and really cared about people. As a child he always called me to ask how school was going. He really took an interest in me. When I was in my teens, I would sometimes bartender in his huge home when he had other doctors over for a dinner party. I was very impressed when his friends would discuss medical cases with him and seek his advice.

Unfortunately, my uncle developed bone cancer in his leg when he was 57 years old. The year before he was diagnosed, he took me to the island of Jamaica for a winter vacation. After his leg was amputated, I would visit my uncle at least twice a week at his home. I was 18 at the time, and couldn’t believe this was happening. I helped him get around the house and had many interesting talks with him. I remember one day, while we were visiting Simon, my mother told my uncle to tell me to cut my hair. She thought it was too long, (it was 1971). As sick as my uncle was, he told my mother to, “Leave Barney alone.” A few months later my uncle died. 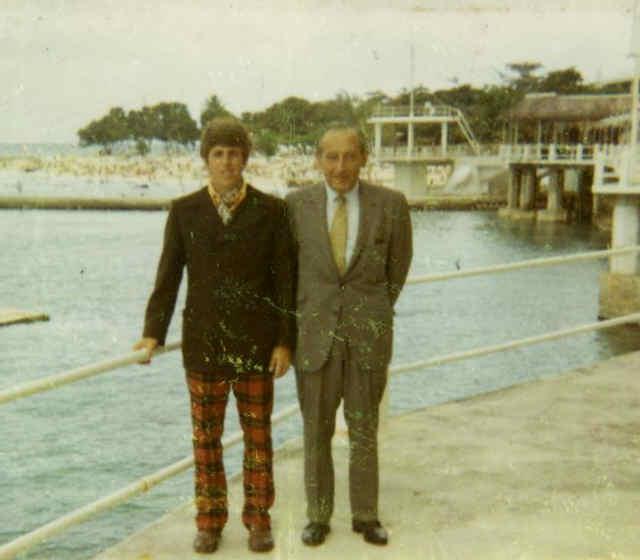 I will always remember this wonderful man. At any moment I can picture him in a suit, white shirt and tie, and polished shoes. He had “class” and “style.” With the world becoming more and more casual, it’s nice to have memories of Simon. I guess I’m old fashion in certain ways.

It’s too bad Simon died so young, but I’m grateful for the short number of years I knew him. Only 18 years with Simon, but I feel he never really left me.

One day I was walking down the corridor of the Mount Sinai Hospital dental clinic. I was wearing a typical resident outfit; white pants, a long white coat, and a shirt and tie. The year was 1977, during the month of September. Dr. Jack Klatell, the head of the dental department, called me aside for a moment. He asked me if I was interested in earning my first private fee for dental services. Considering I was only paid $100/week as a resident, I couldn’t wait to hear his proposition. He said a woman he knew living on Park Avenue needed a crown recemented. He explained that due to her medical history, she required a house call. Well, I packed up my knapsack with the necessary instruments and took the subway to her apartment. The doorman asked me to sign a large leather book, and than he announced to the patient that I was on my way up to her apartment. The apartment was unbelievable. The elevator opened into her living room. I thought I was entering a palace in a foreign country. Acting as if this was an ordinary event for me, I sat the patient down in a beautiful leather chair and recemented her crown. She asked me to come back the following week to clean her teeth. Now the tough part came. She asked me what she owed me. Eight years of education and finally the question arrived! I told her the visit was $50 dollars. She gladly paid me my fee. I felt like I just received a million-dollar bonus on Wall Street. After leaving the building, I immediately called Shelly and told her how I earned my first dollar as a dentist. On the way home I bought a Nikon flash for my 35mm camera. With the change left over, (remember this was 1977), Shelly and I skipped Chinatown that Saturday night and went to a nice Spanish restaurant instead. SOME THINGS YOU NEVER FORGET.